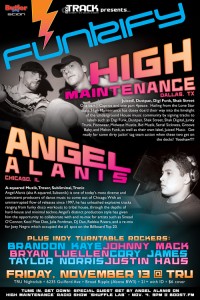 Angel Alanis (aka Klip Hart, A2, Hayashi Atari, Kasper Weiss, Magic Elephant Orchestra) is one of the most diverse yet consistent dance music producers to emerge from Chicago. With an uninterrupted flow of releases since 1997, Angel has unleashed tracks ranging from house and filtered disco workouts to tribal house, tech-house and minimal. Angel's inimitable style and masterful production technique secured remix and collaborative work with top tier artists such as
Felix Da Housecat, DJ Rush, Colette, Sinead O'Connor, Greenskeepers, Julia Fordham, Robbie Rivera, Pole Folder, M.in and are-mix for Joey Negro, which occupied the #1 spot on the billboard charts. In 1997, Angel released his debut EP “Advanced Therapy” on the Contact Records label. Angel went on to release numerous classic tracks through Contaminated, International House Records (IHR), and Moody. In 1999, Angel delivered his full-length debut album "The Subconscious State of Techno" and in 2001 Angel premiered his imprint, A-Squared Muzik, with the smash hit “Do You Like the Way You Feel When You Shake.” Angel was awarded in 2004 with a ranking on BPM Magazine's Top 100 DJ List after producing DJ Colette's Dancestar Award winning song, "Feelin' Hypnotized," which was heavily licensed for compilations, commercial and film synchronization, and appeared in a Motorola television advertisement.

Until recently, Angle was a member of Noise Floor Crew with Lady Foursquare, Local Hero, and various artists including 12th Plant and Fluffronix. Noise Floor remixed Portishead’s “Third,” which garnered attention from New York Magazine and Big Shot Magazine. Klientele, the techno label founded together by Angel and Foursquare, featured work from Harvey McKay, Nikitin, Semikashev, and Punisher. Angel has since parted from Noise Floor Crew, as well as the Klientele label. He is currently starting Microsquare, his own independent label, which will focus on house and minimalistic music. In addition to working with DJ Pierre and the Afro Acid team on Pierre’s solo album, Angel is currently working on a mainstream project called “kliphart,” which is sure to earn the acclaim that has been seen thus far.

Hailing from Dallas, TX., a city that has spawned such house music greats as Brett Johnson, JT Donaldson, Demarkus Lewis, and Lance Desardi, the producing tandem of J. Caprice & 4peace, otherwise known as HIGH MAINTENANCE, seem destined to be the next big thing out of Big D! In a city full of, and respected for it's deep house & minimal DJ's, High Maintenance has been makin' their presence felt with their signature funky, dirty, jackin' underground style of house music. Their high energy tag team sets are setting dance floors across the world on fire while their infectious clownin', lighthearted personas make them a crowd favorite.

Both have been accomplished DJ's for quite some time (4peace since '89 and J. Caprice since '96), but it wasn't until Feb. 2008 that things started taking off on the producing front when the two met through a chance encounter on myspace. Needless to say, it was a match made in heaven and like two long lost brothers, J. Caprice & 4peace immediately clicked and started working on tracks together under the guise of High Maintenance. The house music community instantly took notice and the pair have been getting tracks signed at a torrid pace to such respected labels as Digi Funk, Dustpan, Groove Baby, Midwest Hustle, Meltin' Funk, Junky Trunk, Footwear, Bid Muzik, Llama Farm, HuHu, Shak Street, Serial Sickness, Illuminati, Voluptuous, & 3345, as well as their own label JUICED MUSIC, which has firmly established itself as a powerhouse in the worldwide house community. Their tracks have been charted by the likes of Mes, Smokingroove, JR From Dallas, Sonny Fodera, Combined, & Tommy Largo.

With no signs of slowing down and a sound that continues to improve and mature with each release, the future looks very bright for the High Maintenance boys!