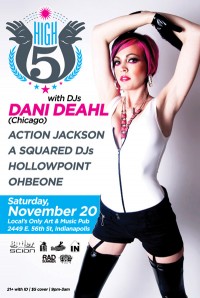 She lives in the city that invented house music – Chicago. She has a record label with one of the most respected names in dance music, Satellite Records. She writes for the United States’ top industry publications including URB and TimeOut. She tours around the world and has a host of tracks on the industry’s top labels. This is Dani Deahl.

Dani is sassy, punky and brings the attitude with her rock’n’roll meets electro vibe. Her music epitomizes a raw, hard style of electro that is still accessible to club-goers and her style is just as vibrant and unique; Her signature pink and black hair has become just as much of a calling card as her sound. Beyond the image, Dani is just as known for her personality as she is for her flawless sets, top notch production and working in multiple areas in the dance industry.

Dani began DJing ten years ago and within her first year conquered top Chicago clubs. Realizing she was quickly outgrowing the local scene, the fresh-faced artist quickly hit the road, extensively touring across the globe from Hong Kong to Bolivia while concurrently releasing her first records. Industry heads watched as Dani continually proved her clairvoyance in predicting the next hot thing, leading to “Dani Deahl Presents The Top 10″ with the Canary Islands’/England’s OasisFM, and a position as House Editor with URB Magazine. “It was unusual, and still is unusual, to see a woman in the industry multi-task on so many levels,” says Dani.

Since those early days, Dani’s career has blossomed, and keeps getting stronger. She continued writing with URB and began writing features for TimeOut Magazine, was selected as a top finalist for Rockstar Energy’s “Beauty And The Beats” contest, extensively toured, continued to release records (including Billboard charted “Poppin’ Bottles”) and began her own music blog D Squared – boasting 70 thousand unique hits a month. Among her notable accomplishments – she’s interviewed everyone from Paul Oakenfold to David Guetta, played prestigious Chicago-based Lollapalooza twice (one of the only DJs to do so) and had a hand in starting indie label Calamity Jane Recordings, boasting releases from artists such as True Pseudo and dark horse artist, Pilotpriest. Dani is becoming one of the most recognizable female DJs, and is making a considerable impact in the process.

There are no limits for Dani Deahl, and it’s no wonder she’s often referred to as ‘the hardest working female in the industry’. While the next few years present endless possibilities, Dani plans to focus primarily on her own production and DJing while nurturing Calamity Jane. “It’s no longer good enough to be just a DJ. ” she says. “The question now in our industry is, ‘what are you giving back?’ I can say for me, with the utmost confidence…a lot.”