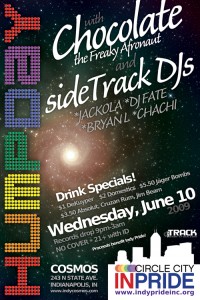 The small east-side neighborhood bar Cosmos will become a small, intimate dance club on Wednesday night for Pride's "Humpday" event. The night will feature sideTrack, a team of DJs and promoters made up of Jackola, DJ Fate and Bryan Luellen. All three DJs are known collectively and individually for playing house music at various venues in Indianapolis including Talbott Street, Forty Five Degrees and Therapy Nightclub, as well as performing in other cities like Bloomington, Louisville, Chicago and Denver. The no-cover event starts at 9pm and will keep you dancing until 3am with drink specials and dance music. More information at www.side-track.com.

Cosmos also has a pool table and two dart boards.

Help us break this place in!