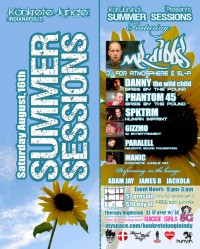 21+ with ID
Tweet
Mr. Dibbs, the DJ for Atmosphere and EL-P will DJ at Therapy Nightclub along with Danny the Wild Child, Phantom 45, SPKTRM, Gizzmo, Parallel, Manic, Adam Jay, James B and Jackola.