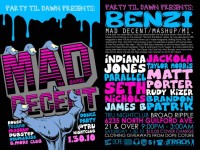 21+ with ID
Tweet
January 30th 2010
-
TRU Nightclub (Broad Ripple)
-
9:pm - 3:am
-
21+ with valid ID
-
Mad Decent "dance party" w/ DJ BENZI
-
DJ BENZI / MAD DECENT RECORDS / MASHUP
Born and raised on a small island just outside of Detroit, DJ Benzi has been separating himself from the competition for the past 26 years. After picking up his degree in Business & Economics at Western Michigan University, Benzi relocated to Ann Arbor to pursue a career in the entertainment field full time. He started growing his roots as a Club DJ at the age of 17, but it wasn’t until he started producing and hitting the mix tape circuit that he really started gaining the attention he deserved. In the past year Benzi’s buzz has skyrocketed with a whirlwind of attention from his patented “refixes” and refreshing work he was done with The Clipse and Lil Wayne on the popular “We Got The Remix” series. DJ Benzi is most known for his creative twist on bridging the club/dj culture with that of commercial mainstream hip hop like never before. The Detroit-area remix maven is rapidly gaining notoriety, this year alone he was been chosen to URB Magazine’s Next 100 list and has shown up in XXL Magazine, Scratch Magazine, Rolling Stone, The Washington Post, and MTV. His forthcoming debut album “Get Right” on Amalgam Digital is sure to be an early candidate for album of theyear, and he currently touring to promote the album all throughout the world!
-
INDIANA JONES / B.MORE
-
MATT PORTER / FIDGET HOUSE
-
SETH NICHOLS / PROGRESSIVE TECHNO
-
JACKOLA / HOUSE
-
RUDY KIZER / HOUSE
-
TAYLOR NORRIS / TECHNO
-
BRANDON PATR!K / HOUSE
-
PARALLEL / DRUM & BASS
-
JAMES B / PROGRESIVE

Presented by: Party Til Dawn