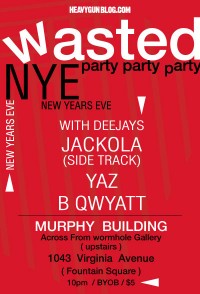 Everyone has been asking "Where's the party for New Years Eve?" The Heavy Gunners gotcha covered!

Spend this NYE at the Murphy Building getting Wasted (Party, Party, Party)!


The debauchery begins at 10 PM and goes until whenever we get shutdown!