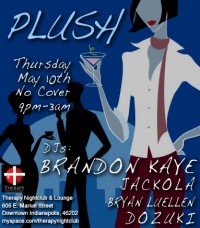 21+ with ID
Tweet
This was our first ever edition of PLUSH on Thursdays at Therapy Nightclub & Lounge.