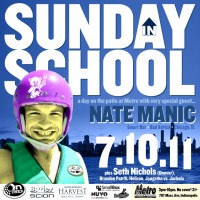 After a very packed PRIDE TEA DANCE, we're at it again out on the patio at Metro Nightclub w/ the INHouse DJs!

NATE MANIC (Chicago)
Smart Bar / Bad Advice Records
Nate Manic's presence on the Midwest dance scene can be described as nothing less than ubiquitous, with hundreds of appearances at the region's best venues and events over a career spanning 10+ years. Always setting high goals and looking to the future, he continues to be a respected member of Chicago and the Midwest's history with significant contributions to it's dance community.

SETH NICHOLS (Denver)
INHouseDJs / LoveVinylRecords.com
http://www.facebook.com/pages/Seth-Nichols/91118501334
Not many can claim to have their entire lives devoted to electronic music. Seth Nichols is one of the few. DJ, promoter, record store owner, producer, Seth dabbles in a bit of everything, and executes it all with perfection. You may have purchased vinyl from him at his old shop – Evolving Records (or his new shop, Love Vinyl Records). You may have seen him at one of his resident nights at Therapy Nightclub in Indianapolis. You may even have been handed one of his mixes at WMC. Whatever your connection to Seth, it’s clear he has a true passion for what he does. And it’s infectious.

BRANDON PATR!K
aka CHOCOLATE THE FREAKY AFRO NAUT
INHouse DJs
German-born and US-raised, he mixes up funky house, breaks, and slammin' tekno into one cohesive blend of fierce mayhem.

JANGATHA
INHouse DJs / Aquasound/Pin Up/Molacacho/Guest House
http://soundcloud.com/jangatha
http://www.facebook.com/jangatha
After a decade behind the decks hitting up parties from coast to coast, Jangatha's production has recently hit the underground house scene. He has released tunes on some of the best house labels, sharing the roster with countless veteran producers. Known for his crispy clean production, thick sound design, unique genre blending, and sharp funky shuffles, his tunes have also been getting rotation by some of the house greats, such as Dj Dan, Mark Farina, Johnny Fiasco, and Colette. With loads of remixes and original EP's slated for digital & wax release this coming year, you will likely be hearing about him more and more for years to come.

JACKOLA
INHouse DJs / OnTrack
http://www.facebook.com/jackolaMusic
Jackola is one of Indy's busiest DJs, infusing multiple styles of house music at bars, clubs and events across the city, across Indiana and even in major cities like Denver, Chicago and Detroit. He's opened for the likes of Paul van Dyk, Derrick Carter, Above & Beyond and Donald Glaude, as well as played at large scale music festivals like Forecastle Festival, Monolith Festival, Midwest Music Summit, Oranje Festival and Mojostock. Jackola is no stranger to festivals, as one of the founding promoters of Broad Ripple Music Fest. You never know if you'll catch him playing tech house, funky house, hip house or even dubstep, but one thing's for certain: he commands the dance floor to move!