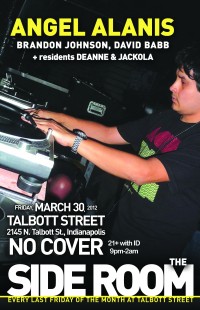 The Side Room w/ Angel Alanis

* ANGEL ALANIS - techno - house
Angel Alanis started as a DJ at the age of 14 and in 1997 released his debut double pack EP “Advanced Therapy on Contact Records. Since then, he continues to produce a diverse stream of songs landing him on labels such as Naked Lunch, Afro Acid, Impact Mechanics, Chroma, Gynoid, Spark, Nachtstrom Schallplatten and has been featured on labels like Tresor, Tronic, International House Records, Moody and more. As a DJ Angel’s raw talent and innovative style has landed him gigs all over the globe.

In 2011 Angel joined the afro-acid team Home of DJ Pierre and established two other labels, Home Audio Recordings with partner Steve Parker and his own techno label Slap Jaxx, which has already earned acclaim from such DJs as Adam Jay, Dave Clarke, Ken Ishii & Dj Rush & Slam. His most recent work includes collaborations with Rebbecca Ciaglia & Adam Jay as Cubix/Advocates and is also working with DJ Shiva & Taylor Norris. In addition, his work on the Freedom Series albums and continuous flow of remixes has proved Angel’s passion and dedication for the music and not the hype, while earning him a devout fan base.

PLUS Side Room co-hosts...

* DJ DEANNE - House
INHouse DJs / Talbott Street
With influences such as Ralphi Rosario, Peter Rauhofer, Roger Sanchez, Robbie Rivera, Mark Knight and Chus & Ceballos, Deanne's style is defined by the spirit and energy of house music. Vocal, progressive, underground, tech and elec-tribal beats and rhythms are combined to take her listeners on a unique journey that is marked with emotion, sensuality, undeniable energy, and wonderful "dance floor drama". Deanne can be heard monthly at Talbott Street in Indianapolis. Nominated in 2010 and 2011 as one of Indy's best DJs, and winner of Metromix's 2009 Sexiest DJ title, Deanne is heavily active in the local scene with continual appearances at local venues, parties and festivals. She has played alongside Paul Van Dyk, Starkillers, Twisted Dee, Mike Cruz, DJ Dan, Above & Beyond and DJ Collette, among others. Her mix show can be heard throughout the week on G.I.R.L. and PartyRadioUSA. Check out Facebook and find her on iTunes for more fun stuff and links to downloads of live sets and other recordings.
http://www.facebook.com/DJDeanne
http://www.soundcloud.com/djdeanne
http://www.facebook.com/INHouseMusic

* JACKOLA - House
INHouse DJs / OnTrack
Jackola is one of Indy's busiest DJs, infusing multiple styles of house music at bars, clubs and events across the city, across Indiana and even in major cities like Denver, Chicago and Detroit. He's opened for the likes of Paul van Dyk, Derrick Carter, Above & Beyond and Donald Glaude, as well as played at large scale music festivals like Forecastle Festival, Monolith Festival, Midwest Music Summit, Oranje Festival and Mojostock. Jackola is no stranger to festivals, as one of the founding promoters of Broad Ripple Music Fest. You never know if you'll catch him playing tech house, funky house, hip house or even dubstep, but one thing's for certain: he commands the dance floor to move!
http://www.facebook.com/jackolaMusic
http://www.jackola.net/
http://www.facebook.com/INHouseMusic