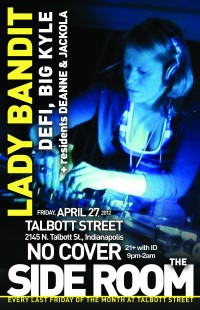 The Side Room w/ Lady Bandit

* LADY BANDIT - Sexy Breaks/House :: Dayton, Ohio
Break On Thru Productions/Give Us A Break! Records/Next Era Entertainment
Taking turntables as a debt in 2002, Lady Bandit fell upon this opportunity to dj, so she took it! Beth said the only way she'd ever stop djing would be if she stopped having fun or stopped progressing. Now, 9 years later she's still bangin out dancefloors throughout the midwest and beyond. Known as the "Midwest Breakbeat Queen" originally out of Dayton, Ohio. Bandit always bringing back her original influences of DJ Fixx, Icey, Infiniti, Sharaz and nameless others in the "Funky Florida Breaks" movement with a touch of that "Nu Skool Funk" that the UK delivers today. This lady never stoppin those nasty basslines & Sexy Breaks with a side of that dirty Electro House. You can also check out Lady Bandit under the alias DJ SazzaFrazz, playing Drum & Bass!
www.facebook.com/breakonthruproductions
www.soundcloud.com/lady-bandit
www.ladybandit.com
www.breakonthruproductions.com

* DJ DEFI - Multi-Genre :: Indianapolis
DEFI has been DJing for over 10 years now, starting out as a Trance DJ and progressing throughout all genres of electronic music, finally finding his passion for break-beats and tech-funk. DEFI has shared the stage with many headlining acts throughout his career such as; DJ Icey, Paul Oakenfold, Forest Green, Reid Speed, Dara & Photek just to name a few. When DEFI hits the decks, he plays only for the crowd, so you NEVER know what you're going to get, but its always a guarantee that the dance floor will be full with energy every time he takes the stage!!
http://www.facebook.com/Dj1Defi
http://soundcloud.com/defi-2
http://www.letsmix.com/defi

* BIG KYLE - Electro House :: Indianapolis
Big Kyle has been in the electronic scene for over 10 years. Big Kyle started DJing, like most, at friend’s house parties and then expanded to play clubs and events at different venues across the Midwest. Influenced originally by the likes of Badboy Bill, DJ Dan, and Richard Vision, Kyle’s influences have expanded over the years to include artists from several different genres. When Kyle plays expect a remix to be thrown in there somewhere to blend the old school with some new. One thing is for sure and that it is bound to be 4 to the floor with the sole intention of getting peoples backs off the wall and their feet moving.
http://www.facebook.com/bigkylehouse
http://soundcloud.com/big-kyle/big-kyle-fall-2011

PLUS Side Room co-hosts...

* DJ DEANNE - House
INHouse DJs / Talbott Street
With influences such as Ralphi Rosario, Peter Rauhofer, Roger Sanchez, Robbie Rivera, Mark Knight and Chus & Ceballos, Deanne's style is defined by the spirit and energy of house music. Vocal, progressive, underground, tech and elec-tribal beats and rhythms are combined to take her listeners on a unique journey that is marked with emotion, sensuality, undeniable energy, and wonderful "dance floor drama". Deanne can be heard monthly at Talbott Street in Indianapolis. Nominated in 2010 and 2011 as one of Indy's best DJs, and winner of Metromix's 2009 Sexiest DJ title, Deanne is heavily active in the local scene with continual appearances at local venues, parties and festivals. She has played alongside Paul Van Dyk, Starkillers, Twisted Dee, Mike Cruz, DJ Dan, Above & Beyond and DJ Collette, among others. Her mix show can be heard throughout the week on G.I.R.L. and PartyRadioUSA. Check out Facebook and find her on iTunes for more fun stuff and links to downloads of live sets and other recordings.
http://www.facebook.com/DJDeanne
http://www.soundcloud.com/djdeanne
http://www.facebook.com/INHouseMusic

* JACKOLA - House
INHouse DJs / OnTrack
Jackola is one of Indy's busiest DJs, infusing multiple styles of house music at bars, clubs and events across the city, across Indiana and even in major cities like Denver, Chicago and Detroit. He's opened for the likes of Paul van Dyk, Derrick Carter, Above & Beyond and Donald Glaude, as well as played at large scale music festivals like Forecastle Festival, Monolith Festival, Midwest Music Summit, Oranje Festival and Mojostock. Jackola is no stranger to festivals, as one of the founding promoters of Broad Ripple Music Fest. You never know if you'll catch him playing tech house, funky house, hip house or even dubstep, but one thing's for certain: he commands the dance floor to move!
http://www.facebook.com/jackolaMusic
http://www.jackola.net/
http://www.facebook.com/INHouseMusic