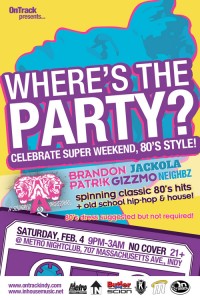 There's TONS of parties going on the night before the Super Bowl, but how many others have NO COVER and classic 80's music?!!

A-SQUARED INDUSTRIES - spinning all of the 80's pop classics

NEIGHBZ - opening with a sampling of all his favorite 80's records